so my weekend was ok, aside from a few meltdowns on mike's behalf. he's totally crazy right now and i hope he gets that fixed.

we went and saw the jackass movie and it was HILARIOUS. and i fell even more in love with johnny knoxville. and i will keep in mind NEVER to ever make out with chris pontius. let's just say that horse bukaki just isn't as appealling as it may sound.

my throat has been hurting pretty bad for the past couple of days and i'm keeping my fingers crossed that i do not get tonsilitis this year. i have only had it once this year and that is because i haven't travelled or started any new jobs. so i got lucky. usually i get it about 3 times a year. luckily, i have a doctor's appointment this friday and i'm totally stoked. i will mention my tonsilits problems to her.

so all i did today was clean the kitchen and nap... tylonel sore throat knocks me out. work tomorrow.

it's a very sad existence when you actually look forward to going to work because you just want something to do. *sigh*

- a 10th grader is shot in the leg outside of cordoza high school. injured but not dead. no suspects.

- a "mob" of teens loaded a crowded metro bus, broke a window with a rock, then shot 2 shots inside against a rival "mob" of teens. apparently it was "mob" related. at this time, it is unknown (or unimportant?) if anyone was killed or injured.

how and WHY does this kind of stuff happen? this made me sick to my stomach:

EDWARDSVILLE, Illinois (AP) -- A man who admitted in court to tearing off the head of a kitten after a fight with his girlfriend has been sentenced to two years in prison.

When it comes to animal abuse cases, "we don't get prison sentences all the time, so it's always good when we do," Stephanee Smith, a spokeswoman for the Madison County state's attorney's office, said Tuesday of the case against Jacob Thornton.

Thornton, 21, was to have had a preliminary hearing last Thursday on the felony animal torture charge but instead pleaded guilty, Smith said.

A judge ordered Thornton's sentence to run concurrently to a prison term related to a parole violation on a 2005 aggravated battery conviction.

Authorities say that after a July 28 dispute between Thornton and his live-in girlfriend, the 30-year-old woman left the home before returning to find her kitten's head and detached body in the front yard.

Four days after he was charged with animal torture, Thornton was also charged with burglarizing a motor vehicle. That case is pending.

he should have gotten a lot more than 2 years, IMO.

i wanted to do a quick update before i went to bed. well, i cleaned my whole apartment tonight. i am part of this consumer research company called pinecone research that pays me to do surverys about various things. i make about $20-30 month. it's not bad... it's lunch money, ya know? well, they also send me new products to evaluate before they go on the market. today they fedexed me this huge bottle of scrubbing bubbles, the cleaning supply stuff. it's new, but i can't figure out what's so new about it. something to do with soap scum. and it smells like a creamcicle.

anyway, once i got it, i was really stoked (free stuff makes me happy) and i decided to test it out in the shower. but i ended up scrubbing the WHOLE bathroom with it. i literally did a fall cleaning. i cleaned the toilet and sink, under the sink, in our cabinet, behind the toilet. then i scrubbed the floor, and vacummed! then i couldn't stop and i did all the dishes and lysol'd the kitchen and used this new fancy shmancy food surface sanitizing spray on everything! i don't know what got into me!

for once, my uncontrollable ADD worked wonders. and now i'm zonked. and shall go to bed.

i just wanted to let the world know that i cleaned my house. it's awesome.

i'm feeling pretty good today. the weather outside is absolutely phenominal and worth talking about for a hot minute. right now in washington, dc it is partly cloudy with a temp of 69 degrees. so delightful.

during my lunch break, i walked home with chinese food for mine (since he's still on leave for his leg injury) and the chinese food was gross. bleh. i am really craving some frozen yogurt right now and i think i'm going to walk over to baskin robin's and get some. yummmmm!

i really have nothing to say today. that's it!

i'm at work (what's new). mike fractured his shin yesterday, so he's at home sleeping. i'm way jealous. today i decided it would be great to wear this button-up shirt that has snap buttons instead of regular buttons and everytime i move, bend over, breath, exist, etc., the buttons fly open. luckily i'm wearing a shirt under it, but it's very freakin' annoying.

i just finished cleaning out my desk for the 10th time this month. the weekend receptionist really makes a mess of my desk and it's really annoying. my house is a mess right now, but my desk is immaculate. i guess that's the way it goes. i spend more time here than at home!

so my icon is me at work. cute!

um, what else... nothing really. i had mcdonalds for breakfast (which i shouldn't have) and it was good. i'm going to go VERY light on lunch. i probably won't even eat lunch. just to make up for my slippage.

this weekend seems promising. i'm going to go to forever 21 and buy more cute shirts. and mike and i will go to the rennfest if the weather cooperates. hooray! does anyone else want to go? we would like to hang out with friends.

so i just finished my work for the day and i'm zonked. i had a lot of spreadsheet work to do and adding all those numbers makes my brain hurt terribly. if i never had to type numbers again, i'd be happy. but i know that next month, there will be more washington post bills to input and i'll be bellyachin' again about how much i despise it.

but anyway, one thing that is good is that i'm back on iam.bmezine.com. i was off for about a year because i couldn't afford to be on it. $10/6 months works for some people, but not for me. i'd rather by cheeseburgers. which is why i'm fat. but we're not gonna talk about that. greg gave me a coupon which gives me access until november 1st. but then when i got back on, a friend of mine from the site also gave me some coupons, so i'm good through the rest of year.

i was way addicted to bmezine once upon a time, and fancied myself a few boys from there. i, of course, met scott through bme, who i had a (tumultous) 2 year relationship with. i also met greg. and i met a few other people, not just dudes. this was before the advent of myspace and it's huge popularity. so i feel kind of at home on that site and enjoy catching up with the people who are still on there.

enough babbling about bme, i'm fucking hungry! i'm debating on what to have for lunch today. my choices are: tono sushi (veggie lunch combo including 2 cucumber rolls and gourd strips, miso soup, and salad, for $8), mcdonalds (barf), chipotle (good SOMETIMES), and thaaaaaaaat's about it. the rest are serious sit-down restaurants which i don't really feel like being in. the people in tono sushi know me well and everything is very fast. i have the same seat i sit in every time i go in and they're very friendly.

aw, who am i kidding? this is a no-brainer. sushi it is!

today is starting out ok considering last night mike was talking in his sleep like a mad-man.  not just talking, but like arguing.  seriously.  every 30 mins or so, he'd wake me up by saying, "fuck!" or "goddammit!"  he said, "motherfucker!" a lot, too.  like he was really irritated.  and when i'd yell, "what is wrong?!" he'd just say, "huh?" like he had no clue what i was talking about.

so i yelled at him this morning.  hehehe.

last night after work, mike and i went to the good will in alexandria, va.  let me tell you, it sucked.  the clothes were disgusting and falling apart and everything smelled like piss.   all the clothes were so worn out that they had no shape left to them.  it was pretty gnarly.  i tried to find some clothes, but had absolutely no luck.  oh well.  maybe i'll have better luck this weekend.

but i did find a lot of really good books!

and that was it.  we came home afterwards and i fell asleep promptly.  i am SO happy it's friday & payday.  i will love to sleep in tomorrow.  i NEED to.

luckily, this one fit into the "neat" category. 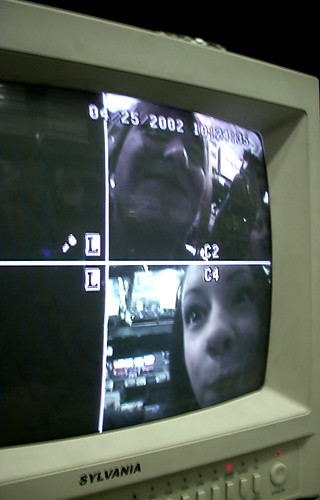 erin death & i at costco.

yes, i'm a bit chilly. i wish i had some kind of sweater or jacket that didn't have skulls on it or something else un-office like. i can't wait to go clothes shopping. i'm in such dire need of clothing, it's not even funny.

i am making myself a cup of hot mango tea to take the chill out of my body. i think i'm getting a cold. i keep sneezing. but it could also be allergies. who knows!

i found out yesterday that my dad is sick and he was in the hospital and had surgery. of course i had to learn this via myspace from my little brother because my brother & father do not have a phone at their house, and even if they did, hell would freeze over before they called long distance. my brother asked me to come home as soon as i can, so i guess i'm going to have to go sometime this weekend, which really interferes with fun plans i had with becca & annie to go camping. maybe, just maybe, i can somehow work around this...

i hate being such a let down to my friends. their always, well becca is always, asking me to do things and hang out and i'm always like, "ehh, i dunno!" or something comes up. i'm sure i seem like an antisocial asshole and someone who makes things up, but my life really is that unpredictable. i AM always sick and ok, well, maybe i am a little antisocial. but not enough to make me miss every hangout opportunity ever.

mike also wanted to go to the renfest this weekend, so i'm torn between 3 things. i could feasably do all three if i was home on sunday, but i think the camping will run into sunday night and that might be a problem.

ok i'm overanalyzing shit. i'm gonna sip my tea and enjoy the crazy icecream truck that is driving around with a big billboard of this lady who's running for mayor with disco music blaring out of the intercom.
Collapse